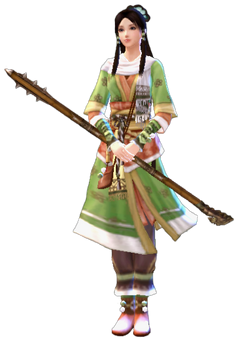 Beggar's Sect is one of the Eight Great Schools in Age of Wushu. It upholds justice and helps those in need. To join the Beggar's Sect, the player must first learn the Beggar Life Skill.

The Beggar's Sect is one of the supporting pillars in defending the country from foreign invasions. Their leader carries the revered “Dog Beating Staff” as a symbol of his authority and position. The most notable technique of the Beggar's Sect is the Eighteen Dragon Subduing Palms. Anyone may join the Sect, making the martial arts of the school diverse. Due to the large size of the school they have a wide network of communication and members have a reputation as excellent information-gatherers.[1]

Beggars fill the role of DPS in a PvE team and are not particularly essential. However, their damage is incredibly high, and they contribute a lot via area crowd controls and high damage in all situations.

Beggars are hard to counter simply because they have too many options with their Lotus Palm set. They can battle at close or long range but prefer close range for combos. A single ground slam from a Beggar can result in a combo dealing well over 70% of an opponent's health. These combos are cool to watch, too; the opponent goes flying into the air, is then knocked away and tackled out of the air into a devastating ground slam that is followed up with rapid palm strikes.

Beggars don't have many weaknesses; Lotus Palm really covers all the bases. The main weakness of a Beggar is that over-aggression can be dangerous. A blocked groundslam or airgrab is guaranteed damage from the enemy.

Beggar's Sect has its own rules and regulations. Breaking these rules will increase the player's Discipline Points. If a player’s Discipline Points exceed 100 and they enter the school area, a punishing cutscene will play. When the cutscene ends, the player’s health will be halved and they'll receive a weakening debuff for an hour.