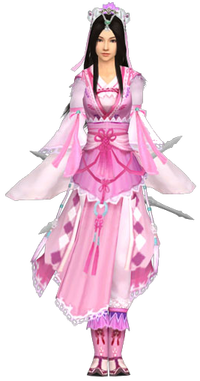 Emei （峨眉） is one of the Eight Great Schools in Age of Wushu. With its extensive scope and power, the Emei dominate the Southwest region and are considered one of the Three Large Doors of Wushu, along with the Shaolin and Wudang. The Emei only accepts female disciples.

The origins of Emei's Martial Arts come from its founder Guo Xiang. Guo Xiang supposedly inherited the Heaven Reliant Sword that contained sacred Martial Arts secrets. This made the Emei even more famous, equivalent even to Shaolin and Wudang. Emei's martial arts range from powerful inner energy skills to the use of bladed weapons and unarmed combat. The main weapon used by Emei disciples is the sword. They use needles and hairpins as projectile weapons to throw at enemies periodically as well. Like Wudang, Emei's skills are dual-natured, having elements of "roughness" and "softness", "long-range" and "short-range" attacks in the same style of fighting. They rotate between deceptive and direct attacks and can be used effectively by women to overcome opponents who are physically stronger than them.[1]

Emei are highly desirable in PvE teams because of their numerous support skills, including the powerful Buddha's Golden Aura rage move that gives her entire team 70% resistance to damage. Additionally, Emei themselves are very tanky due to their Internal skills; it is difficult to hurt an Emei normally.

These ladies have healing and support skills, but they also have powerful and deadly attacks. Departing Sting focuses on close-range rushdown offense, while Golden Diamond Soft Palm has rapid ranged attacks that apply debuffs. Emei combos require no rage and are brutally effective; the Departing Sting style also has a rage move that buffs up the damage on the main combo, allowing the character to take off tons of HP with one well-placed stun.

Emei styles lack subtlety. Countering the typical depiction of women in video games, Emei warriors are direct and lack the shenanigans of other schools. An Emei can go the distance with any other school, but the straightforwardness of their styles can be a hinderance.

Emei has its own rules and regulations. Breaking these rules will increase the player's Discipline Points. If a player’s Discipline Points exceed 100 and they enter the School area, a punishing cutscene will play. When the cutscene ends, the player’s health will be halved and they'll receive a weakening debuff for an hour.