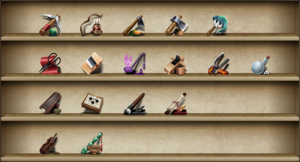 Manufacturing Life Skill Professions take the materials gained from gathering and refine them into useful gear and consumables used by all players. A player can learn two skills from this category, one primary and one secondary. By default, the "I" button opens up the life skills interface.

There are 6 different manufacturing life skills:

Refine cloth, linens/cottons, and silk into armor and item bags, as well as embroidering armor to add additional effects.

Produce drugs that provide massive buffs and debuffs to the user, as well as poisons that augment your armor.

Craft items that are used with other Manufacturing Skills, such as handles, as well as jewelry and boxes.

Smith weapons that can be wielded by other players, as well as quench weapons, adding additional effects.

Any manufacturing profession can be leveled by applying it (for example a Chef by either cooking food or making beverages) or by playing the "match 3" game. The latter is started by challenging the appropriate profession's Life Shifu up to 12 times a day.

The game is a match-3 game and when you match at least 3 resources they are removed from the game board and put into the players or Shifu's inventory on the left or right middle of the screen. This inventory is needed for the abilities mixed into the dueling: The abilities a player and the Life Shifu have are shown on the bottom left and bottom right of the screen. Some are offensive, some defensive. Acquiring the number and type of resources shown per ability charges the ability it ready for triggering (turns from brown to red). Gems act as joker for any of the other symbols.

To play the game the player needs at minimum the professions main tool (for example the spatula for the cook) which acts as an attack weapon, a second, defensive acting tool can be purchase from the Shifu as well. Lining up the fists provides action points for the use of the life skill tool in the top left corner. The tool works similar like Rage moves in so far that it needs to accumulate enough "fuel" - at which time it can be manually triggered for an attack. The higher level the tool is the more fists needed to charge it up for being usable but at the same time the higher the damage or defense output (always equals fist number).

Lining up at least three of the skulls gives the opponent direct damage (1 damage per skull). As the Life Shifu can have defensive abilities as well it can be useful to not use the tool or skulls if a shield is active (icons top right under health bar of the Life Shifu).

The game starts with the players turn. If a player manages to match more than one resource type in one move or more than 3, they get another turn. There is a 20 second timer for a turn. Whoever gets the opponent's health down to zero first wins. A player starts at level 1 and every time of a win is moved to the next level where the Life Shifu has more health. The players rank resets every day back to 1.