The Meridians is a character growth system in Age of Wushu. It is based upon Ancient Chinese beliefs of the flowing of Chi through the body, which is directly related to modern day acupuncture. Unlocking and cultivating these Meridian channels allows the player to further increase their character's stats.

There are 17 different Meridians in the game. Each Great School has its own associated Meridian. Initially, players can only have 3 active Meridians. The number of active Meridians can be increased to a maximum of 8 by consuming Ganoderma Pills. Artifact items can be used to add an additional stat boost to each Meridian.

There are multiple ways to gain Chi:

There are different types of Meridians, each one having their own stat boosts, acupoint opening requirements, and Artifact item.

Each Meridian has its own acupoints that can be opened. Acupoints can only be opened in an ascending order. For example, the third acupoint cannot be opened until the first and second have been opened. Opening a Meridian's acupoint will increase the Meridian's maximum level and improves the maximum effectiveness of an Artifact item. There are two ways to open acupoints:

To open each acupoint, only one of the listed Internal Skill requirements needs to be satisfied.

Artifacts (also known as Rare Herbs) are items that can be used to add an additional permanent stat boost to a Meridian. Each Meridian uses a different Artifact. Artifacts can be obtained from chests in Forbidden Instances and Influence Challenges.

The stat boost provided by an Artifact is random, and the maximum value depends on the number of opened acupoints. The player must pay 10L Silver Coins or 10L Taels when using an Artifact. The currency choice will affect the result:

Qi gathering in Tanden Meridian will boost 5 stats while each School Meridian will do this for 6 different ones. The summary of stats boosted can be seen in the table below. It is to be noted that this only applies if the corresponding Meridian is active (has a 'tick' by its name).

And there is more: after training up to Rank 36 for each School Meridian, an additional effect will be granted!

As a Meridian becomes more cultivated and more acupoints opened through Internal Skill cultivations, a player will collect Skill Points.

First acupoint activation gives no skill point; opening of each subsequent one along the meridian gives 1 skill point. These points are used in the Wushu Skills section within the 'Meridians info' interface and will allow players more customizing options between actions.

Skill Points can be spent to open up Skill Slots and learn 'Skills' (actually - some combo chains). There are 8 Skill Slots available in total. Their Skill Point requirements are:

Under the 'Skill' Selection, each icon corresponds to a combo chain, i.e. a combination of skills belonging to one of the three school skillsets. Players can reset their 'Skills' selection anytime, by spending 100 Liang Silver, resetting also reduces the daily limit.

By learning some 'Skills', the shared cooldown time of 1.5 seconds between the specified 2 skills will be removed, meaning that, after casting the first skill, the player is immediately able to cast the second one - without waiting for 1.5 seconds.

For example, the 'Skill' for Falling Flower Sword style of Scholar is Hero's Tears followed by Flying Swallow Returns. This combo chain's content and its skills' casting order (it will be skill no. 1 before skill no. 2, not the other way round) are fixed and cannot be chosen by the player. 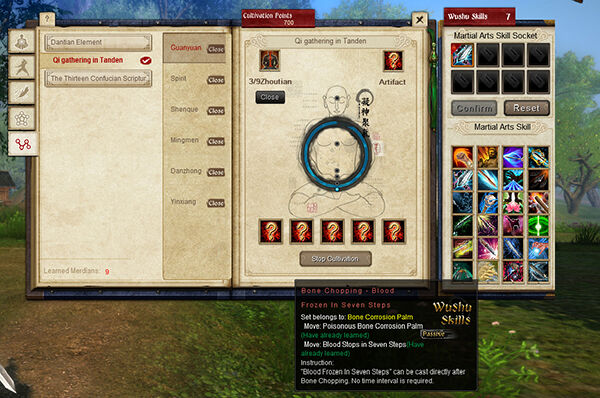 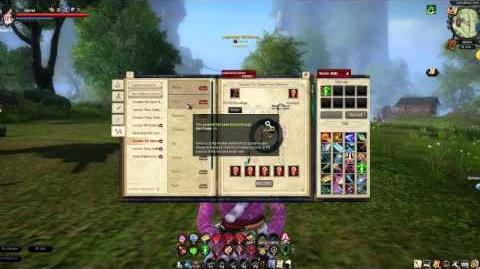