Scholars is one of the Eight Great Schools in Age of Wushu. To join the Scholars, the player must first learn one of the cultural Life Skills.

The Scholars was founded by Xiao Bieqing and Shi Yanbing. They wanted to create the school that gathered like-minded people educated in cultural arts, as well as martial arts. All members of the Scholars are practiced Musicians, Weiqi Players, Calligraphers, and Painters. Their skills use musical frequencies to attack.[1]

Scholars are similar to Emei in that they have several different Martial Arts Sets for different situations. They have group buffs, but they lack healing and defensive buffs; they are more focused on offense through bonus damage and energy regeneration rather than defense.

Scholars have one of the highest single target damage sets in their Leisure Kick set, which boasts one of the strongest school moves, Slow Green Shadow. This powerful kick can easily shred through 80% health. It's devastating even against Wudang, who can't rely on health swapping since one mistake can mean death even from relatively high HP. Their Falling Flower Sword set has a powerful, uninterruptible spin move that deals massive damage in an AoE and can be comboed-into for a devastating assault.

Scholars lack good ranged options, despite Boundless Sword being a ranged set. Leisure Kick is also a risky set because a blocked Slow Green Shadow that doesn't kill the enemy can result in a quick loss, but the options that lead into Slow Green Shadow also consume the buff that makes the move so deadly. Scholars with poor skill often rely too much on their spin to win, and it is fairly easy to escape unless comboed into.

Scholars has its own rules and regulations. Breaking these rules will increase the player's Discipline Points. If a player’s Discipline Points exceed 100 and they enter the School area, a punishing cutscene will play. When the cutscene ends, the player’s health will be halved and they'll receive a weakening debuff for an hour. 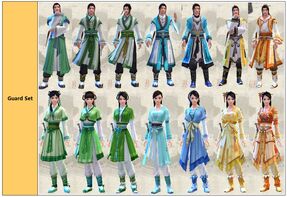 Retrieved from "https://ageofwushu.fandom.com/wiki/Scholars?oldid=20972"
Community content is available under CC-BY-SA unless otherwise noted.