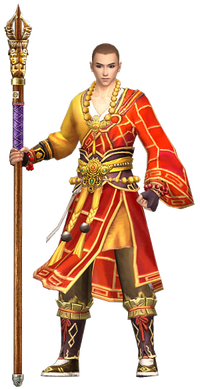 Shaolin is one of the Eight Great Schools in Age of Wushu. Shaolin monks are known for their courage, devotion, and service. They hold important roles as leaders, judges, and the protectors of morality. The Shaolin Temple only accepts male disciples.

The historical origin of Shaolin started in 464 CE, Batuo, a Dhyana Master who came to China from India to spread Buddhist teachings, saw that Mount Song resembled a lotus flower and wanted to establish a Temple within the "flower". The Emperor agreed to build a Temple to worship Batuo. The Temple, located at the bottom of Shaoshi Mountain, is covered with lush forests (Lin). So it was named Shaolin Temple.[1]

Shaolin is a school focused on excellence in close combat. Whether against one foe or many, a Shaolin monk is a powerful ally or deadly enemy. In PvE, Shaolin monks are primarily DPS and crowd control type characters with many options for shutting down groups of foes and dealing heavy damage. They're a bit tougher than most schools, but they're not the go-to class for tankers.

In group PvP or PvE, Shaolin rely on their Bhodidharma's Stick to AoE and crowd control numerous foes at once. Bhodhidharma Stick deals great damage to single enemies, but it's not as fearsome a threat as the unarmed Martial Arts set, Long Style Boxing. Long Style Boxing has a powerful AoE stun and knockdown feint as well as deadly combos designed for crushing a single foe. A Shaolin monk's relentless close-range offense is incredibly fearsome and leaves defenders little room to breathe.

The Shaolin monks' main weakness is long-range combat, and they can be kited. However, adept monks can offset this weakness with hidden weapons and skilled movements.

The Shaolin has its own rules and regulations. Breaking these rules will increase the player's Discipline Points. If a player’s Discipline Points exceed 100 and they enter the School area, a punishing cutscene will play. When the cutscene ends, the player’s health will be halved and they'll receive a weakening debuff for an hour.

Retrieved from "https://ageofwushu.fandom.com/wiki/Shaolin?oldid=20981"
Community content is available under CC-BY-SA unless otherwise noted.