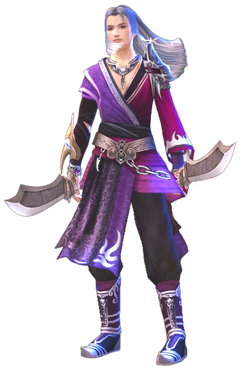 Wanderer's Valley is one of the Eight Great Schools in Age of Wushu. The acolytes of the Wanderer’s Valley are amoral, secretive and sinister. Their art focuses on the use of cunning tricks, poisons, and their vicious mastery of dark chi.

The creator of Wanderer's Valley was a Divinator with an unpredictable temperament. He established Wanderer’s Valley secretly after he knew he would not live past the age of 45. He began to recruit infamous people of China to join the Wanderer’s. Nobody fully understands Wanderer’s Valley, as the members of the school are very secretive. While Wudang and Shaolin are considered official members of Wushu, the people of Wanderer’s Valley are considered exiled members. Most people don’t know where their skills come from. They do things according to their own wishes without leaving any trace.[1]

Wanderer's Valley skill sets all have one basic thing in common: it is almost impossible to avoid damage from them. In PvE, they are able to tank high level instances while dealing massive damage thanks to maximum level Perish Blade and inners focused in healing.

Wind-Catching Blade style is the most popular set and is an aggressive rushdown with ranged damage options. It has more tricks than one would expect and can be deadly at any range. Bone Corrosion Palm is a deadly, slow-killing poison set that restricts enemy movement and kills in disgustingly few hits. Perish Blade is an all-or-nothing sacrificial set that can deal monstrous damage with a single attack.

Wanderers lack defense. This is least notable in Wind-Catching Blade, where their multiple lunges and crowd controls provide interruptions that are hard to deal with. Despite their decent ranged options, Wanderers are only average in that area and can be outdamaged by a runaway dart thrower or a Lotus Palm Beggar. Despite these weaknesses, Wanderers can kill deceptively quickly with just a few attacks.

Wanderer's Valley only has one rule. Breaking this rule will increase the player's Discipline Points. If a player’s Discipline Points exceed 100 and they enter the School area, a punishing cutscene will play. When the cutscene ends, the player’s health will be halved and they'll receive a weakening debuff for an hour. 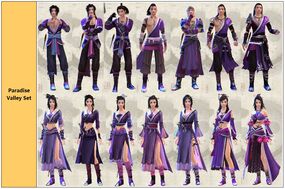