Edit
watch 01:36
We're Getting Mutants in the MCU - The Loop
Do you like this video?
Play Sound

Wudang is one of the Eight Great Schools in Age of Wushu. The basic idea behind the Wudang is balance. The Wudang believe that the balance of one's mind and body is essential to the mastery of the martial arts. In combat, they redirect energy used against them, throwing enemies off balance with a punch, or maneuvering thin swords through enemy defenses.

The Wudang school was created during the Ming Dynasty. The famous Taoist Zhang Sanfeng established the school on Wudang Mountain near the city of Jun, located in Hubei province.

Wudang is renowned for its mountain range: Mount Canshang and Mount Taihe are two of the most well-known and their soaring peaks and deep valleys have inspired generations.In fact, in ancient times it was thought that the main peak, Tianzhu Peak, propped up the sky. In addition, Wudang Mountain is known as "nature’s pharmacy" for there are over 400 different kinds of herbs that grow there.

Wudang disciples are noteworthy for their incredible inability to die. Taiji Sword's ability to swap health and energy, the ability to rapidly recover energy in either Taiji Sword or Yin Yang Sword, and the natural durability of Wudang Internal skills make it very hard to end a fight against a Wudang. If battles go the distance, Wudang swordsmen will be the last ones standing.

Wudang have problems with dealing damage as they lack the overwhelming damage of many other schools. Breeze Sword and Yin Yang Sword have options for fighting at long range, and Taiji Sword is excellent in close. Overall, Wudang is the most well-rounded school.

Wudang has its own rules and regulations. Breaking these rules will increase the player's Discipline Points. If a player’s Discipline Points exceed 100 and they enter the School area, a punishing cutscene will play. When the cutscene ends, the player’s health will be halved and they'll receive a weakening debuff for an hour. 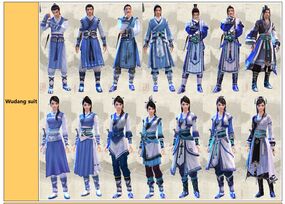 1/4
Community content is available under CC-BY-SA unless otherwise noted.
Advertisement